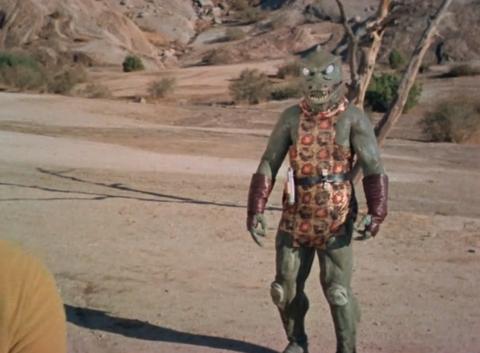 Federation outpost Cestus III has been destroyed. Kirk, Bones, McCoy and three other guys of no consequence beam down on the planet. Spock identifies cold-blooded life forms. Kirk and Spock use blue bocce balls as improvised grenades. A lone survivor, covered in silly putty, relates the story of the attack on the outpost. Has the Enterprise been drawn into a trap? This episode explores deep questions such as What makes humans unique? What is the Gorn? What can't latext do? Would a starfleet commander in the year 2263, or whatever, know how to make gunpowder, much less be able to identify saltpeter in its raw form? Do you know what saltpeter is? Do most alien planets look like eastern California? Will Kirk be killed? Find out Thursday Night at 7 PM, Channel 5.